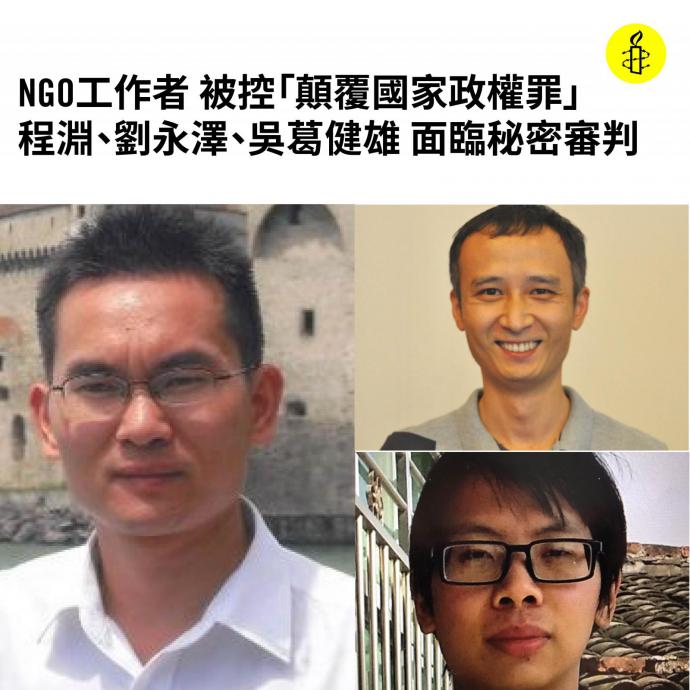 
敬此
Dear Chief Procurator Wang:
I am writing to express my grave concern for three anti-discrimination NGO workers, Cheng Yuan , Liu Yongze and Wu Gejianxiong, who have been detained incommunicado since 22 July 2019. It is distressing to know that members of the three men’s families have been kept in the dark about the case for almost a year, only finding out about your procuratorate’s indictment in the case as a result of a telephone call that they initiated on 10 July.
The three men, who are now detained at Changsha City Kaifu District Detention Centre, have been charged with “inciting subversion of state power” and are awaiting trial by the Changsha Intermediate People’s Court. I am deeply concerned that the three men may have been pressured into firing defence lawyers appointed for them by their families in March 2020.
It is distressing to learn that the three men have now been held incommunicado for more than a year, with no way for their families or lawyers to check their physical and mental wellbeing. Given the limited safeguards protecting those held incommunicado, I am very worried that Cheng Yuan, Li Yongze and Wu Gejianxiong are at risk of torture and other illtreatment.
It is upsetting that individuals like Cheng Yuan, Li Yongze and Wu Gejianxiong who advocate for the rights of marginalized groups and work to protect the rights of the most vulnerable people in society are being detained in such a manner have charged with vague national security offences and detained. Given the lack of transparency with which this case has been handled to date, I am also concerned that these three may soon be tried in secret.
Cheng Yuan, Liu Yongze and Wu Geijianxiong are considered prisoners of conscience, as they have been detained solely for carrying out their professional work and peacefully defending human rights. Therefore, I call on you to:

●immediately and unconditionally release Cheng Yuan, Liu Yongze and Wu Geijianxiong and drop the charges against them as they have been detained solely for carrying out their professional work and peacefully defending human rights.

●ensure that each has regular, unrestricted access to family members and lawyers of their choice and ensure that they are not subjected to torture or other ill-treatment while in detention